For a few years we have been talking about sustainability and looking at ways in which we can support projects and mitigate (as well as reduce) the impact of our business on the environment. However, it has been hard trying to find organisations to partner with. There are so many out there so the choice hasn’t been the issue. The main question we often had was – is this project actually as eco as it claims to be?

The main area we looked at was offsetting projects. These seem like a good idea – we would try to counter the amount of carbon emissions that our business generates so we could be carbon neutral.

Yet, is carbon offsetting really the way to go?

From our research, we were concerned that focusing on carbon offsetting would mean that certain aspects might be overlooked or that this wouldn’t necessarily last. Take the example of a class offsetting project – planting trees. This feels like such an easy win; the constant media stream about losing our rainforests and the destruction of trees contributing so massively to climate change means that surely more trees is great?

Alex Stevenson of Jordan’s Farm says maybe, but maybe not. She challenges this rhetoric, asking – what trees are being planted? Where have they been sourced from? How were they transported? How are they being maintained? What is the long-term plan for the trees?

Alex is a landscape architect by background and has spent her professional career looking at spaces and how they can be utilised. She is now using all of her experience and interest in the environment and putting it into a completely different approach to simply sticking a tree in the ground. 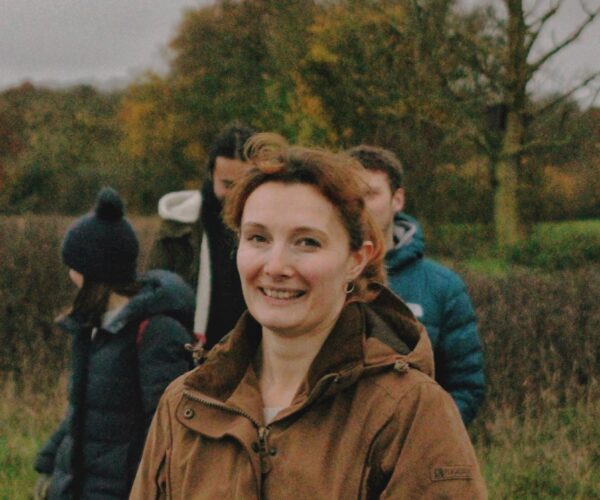 She runs Jordan’s Farm in North Essex and is rewilding her land in a slow, considered and varied way. This includes digging ghost ponds (resurrecting lost ponds that may have been filled in), letting grass grow to provide coverage for skylarks, stripping plastic guards off hedges and trees, creating hibernacula, building a pre-release aviary for wild birds, and yes, planting some trees which are all local, native species.

As with any organisation carrying out work like this, Alex needs support. She has created a subscription as part of her business model, allowing individuals and companies like ours to become ‘Guardians’. So instead of us paying her to plant trees here, there and everywhere, we are contributing to the overall project and helping her to maintain and protect the land.

One example of a clear result at Jordan’s Farm is the appearance of water voles. In June, Alex had just finished carrying out a flora survey with a friend who works at Essex Wildlife Trust. They suddenly spotted a glimpse of a water vole swimming across a pond.

For anyone who doesn’t know much about the environment, this sentence contains two interesting points. Firstly, they actually spotted a water vole, which is quite rare. The second being that it was in the pond. Water voles are not usually seen in ponds, but are more often in rivers. However, these are polluted and inhabited by mink, which have spread throughout our waterways since they were released in the wild in the 1970s. As a result, our country went from having millions of water voles, to a few hundred thousand.

Locally they were reintroduced into the River Colne before the development of a large port on the Thames. Spotting them in a pond in North Essex means that this was a success and they are breeding. Since that June day, they have now been spotted or heard a few times, confirming that this wasn’t a case of misidentification and it wasn’t a one-off.

While spotting a small rodent might appear to be fairly trivial, it really is so much more than that. 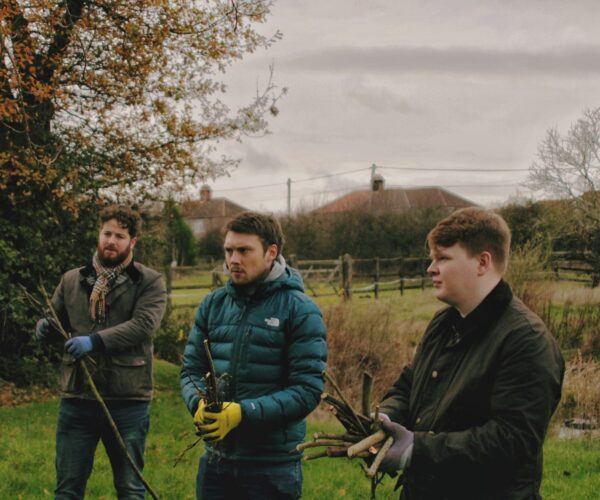 Our team went and spent the afternoon with Alex last week as a little team Christmas outing, helping her finish off the interior of her new aviary and finding out more about her plans for the acres she manages. It is clear to see that if she had more support from other businesses she could realise a lot of her ambitions and do so much good.

Would this be better than planting 1,000 trees? We aren’t in a position to say. Furthermore, it probably could be measured but to do so would require a fair bit of effort (and probably some carbon output too). In the meantime, we feel confident that letting the environment do its thing with a bit of help and taking less of an interventionist approach is the way we want to go in terms of supporting sustainability initiatives.

Since becoming a business guardian of Jordan’s Farm we have also joined 1% for the Planet. You can read more separately about that on our blog, and about our first chosen partner, Seaful.

What Jordan’s Farm and Seaful have in common is that they aren’t looking at the environment in a completely quantitative way. They are taking a more holistic and rounded approach and trying to encourage participation to develop more advocates to continue their work and influence how we view the environment.

Another thing they both have in common is that they need more financial support.

The work they do can’t be funded by them alone – it just isn’t profitable or possible.

So this Christmas instead of sending out cards and presents or expecting any in return – we would just like the following – for at least three individuals or businesses reading this to sign up and become a Guardian of Jordan’s Farm and to make a donation to Seaful.

Have a great Christmas everybody.