All public sector websites should now be accessible - so are they?

As of 23rd September 2020, public sector websites were required to be accessible for all users. This meant meeting the WCAG 2.1 guidelines – the full name for these guidelines is Public Sector Bodies (Websites and Mobile Applications) (No. 2) Accessibility Regulations 2018.

It is important for websites to be inclusive and to meet the needs of people with disabilities such as impaired vision, motor difficulties or deafness and impaired hearing. Accessibility is essential for users who need to access public sector websites as these contain information that should be available to everyone in a fair and equal way. If users are unable to navigate through a website or read a certain webpage, then this could prevent them from obtaining crucial resources.

The deadline for meeting these requirements passed just over a month ago. The Government Digital Service (GDS) is enforcing this directive and can take legal action against organisations that do not have a compliant website as they are breaching the Equality Act 2010.

Given this deadline has now been passed, do you think all public sector websites are now fully accessible?

We wondered whether this deadline would really be met. Based on our experience with other website requirements like the GDPR, we didn’t think it would be. Despite data protection is so important, even now we are frustrated every time we see a pre-filled checkbox.

As accessibility seems to be an even lower priority when it comes to websites and digital platforms, we were dubious of how much change we would actually see on 24 September. We’ve written about accessibility on a number of occasions over the past few years, and it is something we frequently have to explain and even ‘sell’ to clients. Accessibility is not a compromise – if anything, it provides additional benefits and value.

So, before getting into more of a rant about ignoring accessibility and discrimination online, let’s take a look at some public sector organisations to see if the accessibility standards deadline has had the desired effect.

For this first example, we thought we would take a look at the website for the parish council where we are based. Immediately we can see it fails. In the main navigation for the website, the contrast ratio makes the text so hard to read. White text is often problematic and text over an image even more so.

Furthermore – there is even a typo in the postcode for the parish council address! If there had been a thorough review of the website, then surely this would have been spotted.

Whether you have severe or even mild visual impairment you would struggle to be able to navigate this website. You might go straight to the search bar to try and help – if you could see it that is. Again, the pale translucent search box against the bright image background means this gets pretty lost.

Therefore, this website hits a massive stumbling block before even having to look at the detail!

It has been acknowledged that not all organisations will have the funding to make all the necessary changes in order to be fully compliant. If this is the case, the organisation should clearly state in their accessibility statement that it would not be reasonable and would count as a disproportionate burden.

This feels like a bit of a get-out clause. However, there will be public sector organisations that have a limited budget. Like a parish council such as this one. However, it is also pointed out that “You need to think about disproportionate burden in the context of what’s reasonable to do right now.” This is there to try and ensure that ways aren’t found to try and claim disproportionality.

As public sector organisations have been given two years to meet this deadline, they have had plenty of time to budget for it and to avoid it being a burden. So let’s see what the accessibility statement says to find out if they have a reason for not being fully compliant.

Right… so they admit it is not accessible and say they will be working to resolve the issues over the next couple of months. It has actually already been one month since the deadline passed so one month to go then and it will all be sorted! There was a deadline and this has now been missed – saying a couple of months is vague and unhelpful. If you are a person who is disabled and trying to find out information, should you just keep coming back hoping it is sorted?

The statement also doesn’t explain why they are not compliant – it is quite light on information and detail. Making the website compliant with the accessibility has actually been on the council’s radar for quite a while yet they only began looking at it this summer. While we know there has been a pandemic, they don’t say whether the cost was too high to address the issues or why it is not compliant. Was a budget even allocated for the website’s accessibility issues? Were quotes sought to understand the cost to then try to help them budget for it?

While the Government mentions that disproportionate burden is an acceptable justification, they also state that things like a lack of time or knowledge cannot be used to explain inaccessible websites. If the statement is correct that this will be fixed in two months, then it would seem this is an issue of time. And frankly, that is not good enough. The deadline for Accessibility Standards was 23rd September 2020 and this was announced in September 2018.

So to summarise, we can see that at a very small and local level, the standards are not in place.

Here is another example of a government body which has put out an accessibility statement since the deadline passed. 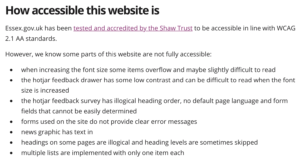 We can see that in the opening line of the statement that Essex County Council has had its website tested and accredited by Shaw Trust Enterprises. Shaw Trust is a charity which supports organisations across the nation to create an accessible environment for their staff and customers.

This shows that Essex County Council has made more of an effort to meet the requirements of the accessibility standards. While their website still isn’t fully compliant, they have made it clear that they’ve addressed the issue by getting it checked by an official accessibility organisation.

We really wanted to find an example of a public sector organisation with a website that is fully compliant with the WCAG 2.1 guidelines…. but we couldn’t. We spent over an hour looking and then gave up. And we felt pretty down about it! With some, we understand there is a huge amount of work that needs to be done but to not even find one felt a bit ridiculous. If you know of any please do get in touch and we will update this post!

We appreciate that not being fully compliant is quite a broad term: some of the websites on the list below had much less work to do than others. However, the guidelines are there for a reason so only having a small amount to do still means that there may be people who are being excluded from information that others can access.

Here is a list of some of the local, regional and national public sector bodies we looked at during our hunt for that accessibility unicorn. Oh, and the first on the list is the Equality and Human Rights Commission. Second is the Equality Advisory Support Service. That means the bodies who enforce and advise on these guidelines aren’t 100% compliant.

We’re disappointed (but not surprised) to see that public sector organisations do not appear to have adequately prepared for the accessibility standards.

Here at We Create, we take website accessibility seriously. We discussed how organisations could begin making the necessary changes in our blog which we posted at the start of the year and recently updated it ahead of the deadline.

With this deadline now behind us, it’s crucial that public sector websites are accessible for all users. This directive was passed for a reason – it is discriminatory to have a website that cannot be used by everyone. In this rapidly advancing digital era, all websites should be built with accessibility in mind anyway. This way they will be viewable to the largest possible audience and will ensure that anyone who needs to access a webpage can do so. This can also expand the client or customer base for a business – it is a win-win.

Authoritative organisations like local government bodies now have a legal responsibility to make their websites ‘perceivable, operable, understandable and robust’. We hope that every effort will be made to meet the new requirements as quickly as possible.